All articles tagged with "Mistress"

When this mistress learned that she was being taken for a ride by her slave, she resorted to teaching him a lesson he had never been taught before. And she did this using her pee. She peed on him and she made him drink it. The entire day, the mistress made sure he only drank her urine. There was no alternative for him and that is how he learned his lesson.

Mistress pees on video for fun

This mistress was interested in trying out something she had never done before. She was bored and she had all the time in the world. And she used it to have the fun she wanted. She had been meaning to try pee fetish and today she did it. The mistress even went ahead to tape herself and then watch her performance to judge herself and make improvements where she deemed it necessary.

Mistress StellaMi had asked this guy to do some work for her but he did not do it as well as she wanted him to do it. So the mistress was pissed when he asked for money for the job he had just done. She felt he did not deserve her money and instead she used her pee to pay him. He had to drink her urine before she let him go.

Mistress Nica did not like this technician's work ethic. She wanted things to be different and for him to learn to do things the right way. She did not want to pay for the same work twice because of the negligence and incompetence of this technician. So she used her pee to dominate him and in so doing, she was able to make sure he did his work as well as she wanted.

Mistress Gaia tests how much pee slave can drink

Princess Nikki and princess Sara wanted this guy to lick their pussies but he disappointed them by not doing it as well as they wanted. They felt wasted and had to punish him for it. The mistresses turned on the guy and they used their pee fetish to punish and torture him. He did not have a choice but to drink the pee and promise to do better if given another chance.

When this couple went around town pissing off everyone and pretending to be the couple of the century, they did not know that there were consequences. They just acted as if they could do whatever they wanted. They pissed off mistress Gaia who had kept her distance but now they had to learn a lesson. She turned them into toilet slaves and made the drink her urine and also lick each other's assholes.

Mistress Amal and Rosella pee on guy for not satisfying them

Mistress Amal and mistress Rosella love hardcore sex and like being fucked hard. But this guy who had a rare opportunity to fuck them together could not deliver what they expected. And since their expectations were high, they took matters into their own hands and they humiliated him. The mistresses made him lick their pussies and rub their clits until they came. Then they turned him into a toilet slave and peed on him.

Mistress Julia pees on herself to prove a point

Mistress Julia and her boyfriend had an argument. He was making a point and used the example that she could not pee on herself because she knew it was wrong. But to prove that she did not care, the mistress stood up and she peed on herself as he watched. Her boyfriend was speechless as she did it and proudly stood in front of him to show him what she had done. 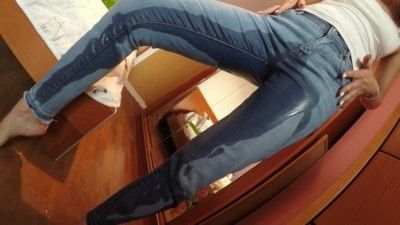 Goddess Allie uses pee to show loser who she is

Goddess Allie had warned this loser not to mess with her but he had ignored her advice. He now had himself to blame because he was being dominated and degraded by the mistress. It was crueler than anything he had ever imagined was possible. The mistress forced the loser to drink her urine and the poor guy could not do anything other than agree and do what she asked him to do.